The carnation tortrix (Cacoecimorpha pronubana) is a Mediterranean species belonging to the family of Tortricidae. It occurs in the Middle East, North Africa, the USA, Europe, including Malta, Sicily, Sardinia, Crete, the Balearic and Channel Islands as well as Madeira. It is polyphagous, observed on 160 cultivated and wild plant species – trees as well as herbaceous forms - of 42 plant families, and it is the major pests in carnation cultures throughout the Mediterranean region, particularly in Israel, Italy, France and Spain. In greenhouses, it is most notable for the damage it inflicts on carnations and strawberries.

Male carnation leafrollers are good fliers and are active diurnally, unlike most leafrollers, which mainly fly at dusk and after dark. The females have a limited flight capacity and only cover short distances. The moth is rather small. The contrasting colours between the yellow to purple forewings (with a dark brown band in the females and two red bands in the males) and the hindwings (bright orange) ensure that the moths of the species are easy to recognize. This colour pattern is most easily observed in the males during flight, and ads in distinguishing the carnation tortrix (Cacoecimorpha pronubana) from the cabbage leafroller (Clepsis spectrana).

Each female of the carnation tortrix (Cacoecimorpha pronubana) is capable of laying up to 700 eggs, deposited in batches of 10 to 200 on the upper surface of leaves or on other greenhouse materials. At first, the eggs are a light green colour, later becoming yellow. They have a flattened oval to round shape.

Caterpillars have an olive-green to bright or yellow green colour, with a black head that later turns yellowish brown with dark spots. After emerging, they move or are carried by wind to the young growing points or flowers where they spin silk around terminal leaves or petals.

The larvae of the carnation tortrix (Cacoecimorpha pronubana) feed on the upper surface, thereby producing holes. Finally, at the third larval instar, the whole leaf is attacked and surrounded by a dense silken mass. The larvae hide inside the rolled leaves, growing tips or flowers that have been spun together.

The feeding caterpillars of the carnation tortrix (Cacoecimorpha pronubana) damage flower buds, fruit and leaves. The buds are penetrated by the larvae. Petals may be joined by larval silk, thus hampering opening and giving flowers a characteristic swollen appearance. In some cases, it may not be apparent that flowers are infested. The species is particularly troublesome in the culture of carnations and strawberries in greenhouses; the damage inflicted to strawberries and other crops grown outdoors is less serious. 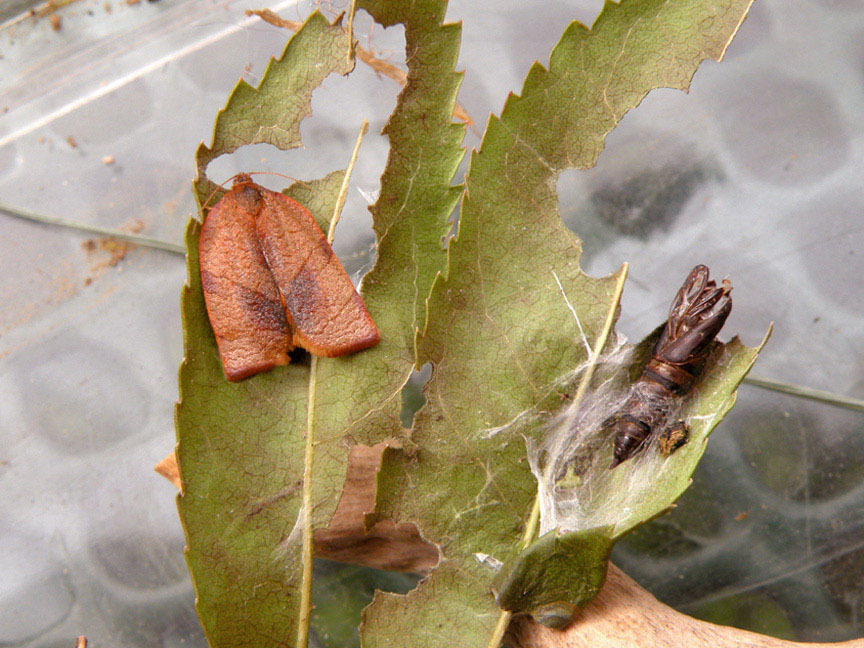 How to get rid of Carnation tortrix