The diamond back moth (Plutella xylostella) belongs to the family of Plutellidae. It only attacks Brassicaceae species, including cruciferous weeds. The diamond back moth (Plutella xylostella) is suggested to have its origin in Europe, South Africa or East Asia, but is now present wherever its cruciferous hosts exist and it is considered to be the most universally distributed lepidopteran species. It is highly migratory and wind-borne adults can travel long distances to invade crops in other regions.

Life cycle and appearance of Diamond back moth

The oval and flattened eggs of the diamond back moth (Plutella xylostella) are initially yellow or pale green and later darken. They are deposited singly or in small groups of two or ten eggs on both the upper and lower surface of leaves, preferentially in depressions, and rarely on stems or petioles.

There are four larval instars. The body tapers at both ends and is green, sometimes suffused with pale yellow, with a few short hairs and small white patches. The larva has five pairs of prolegs; one pair of prolegs protrudes from the posterior end, forming a distinctive 'V' shape. Throughout their development, larvae remain quite small and active. Except for the first instar, which mines in the leaf tissue, the larvae are voracious surface feeders.

The pupae of the diamond back moth (Plutella xylostella) are covered with a white, loose, silken cocoon, usually formed on the lower or outer leaves. They often stick to leaves and frequently hide in crevices near the bud. In cauliflower and broccoli, pupation may occur in the florets. Initially, the pupa is pinkish-white to pinkish-yellow and changes to brown before adult emergence.

The adult of the diamond back moth (Plutella xylostella) is slender, greyish brown with pronounced antennae. The hindwings are narrow, pointed toward the apex. The tips of the wings appear to turn upward slightly when viewed from the side. In males, the upper two-thirds of the forewings are dark, sometimes suffused with ochre or mixed with whitish scales. The lower one-third of the forewing is ochreous-white, with a nearly white upper edge. In females, the upper two-thirds of the forewings are light ochreous and the markings are like those of the males. The back is marked with a broad cream or light brown band along the back, which is sometimes constricted to form one or more light-coloured diamonds, thus the common name diamond back moth. The moths are weak fliers and can disperse, on average, only 13 to 35 m within a crop field, however, they are readily carried by the wind and as such can disperse 400 to 500 km per night.

The caterpillar is a surface feeder. They feed from the lower leaf surface, leaving the wax layer on the upper surface intact, thereby creating translucent windows. In cases of severe infestation, entire leaves may be destroyed, leaving only the veins. The larvae feed also on the chlorophyll-rich green areas of stems and pods causing whitening of the crop. Heavily damaged plants appear stunted and will, in most cases, die. On rapeseed, larvae also feed on flower buds, flowers and young seed pods, causing loss of pods and seeds. 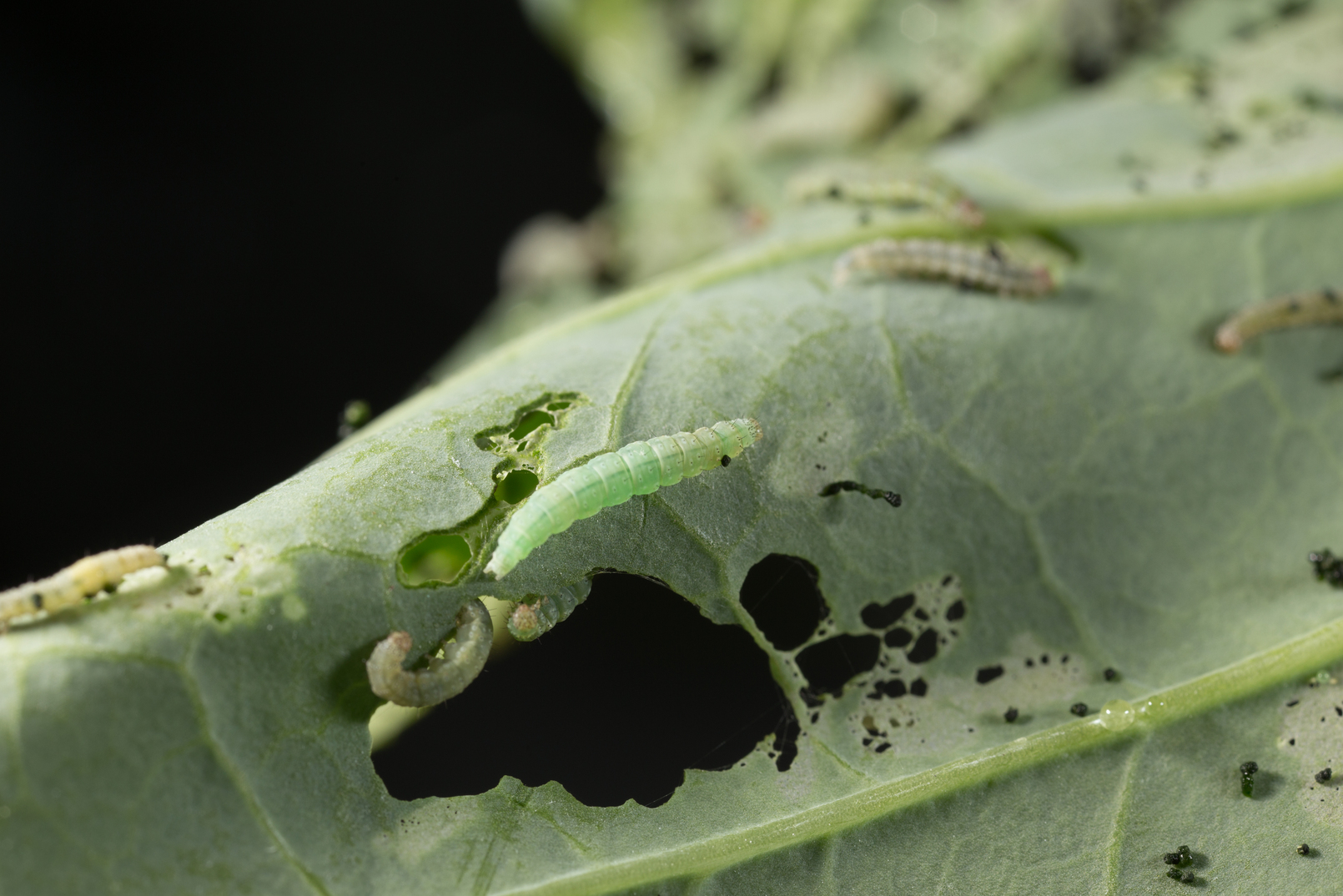 How to get rid of Diamond back moth