IBMA: Back Biocontrol, not chemical pesticides

Europe’s biocontrol industry urges EU lawmakers to back biocontrol, the nature-based crop protection, or miss the Green Deal targets. Reported pushbacks to make Farm to Fork objectives such as 50% reduction of chemical pesticides by 2030 ‘non-binding’ are of deep concern. The biocontrol industry instead recommends the European Commission to go further in its Farm to Fork ambition. Step 1 : The Sustainable Use Directive (SUD), currently under revision should be made to work for biocontrol now.

Speaking at the European Commission’s Farm to Fork Conference ‘Building Sustainable Food Systems together’.  Jennifer Lewis, Executive Director of The International Biocontrol Manufacturers Association (IBMA,) said: “The state of the climate, biodiversity and health are of deep concern to us all and farmers need to be part of the solution. We need a profound food systems transformation in Europe with biocontrol in every farmers‘ tool box. EU policy on biocontrol should help not hinder the growth of the sector. Having backed chemical pesticides for the past 70 years, EU policy must now back biocontrol. Biocontrol is essential to deliver the Farm to Fork Strategy and the Green Deal. My appeal is also to the food industry: Let’s work with nature instead of against it. Investing in biocontrol means investing in the climate, biodiversity and health.”

The Institute for European Environmental Policy report on biocontrol, published in June 2021, identified significant biodiversity, climate and health benefits from biocontrol. Yet the biocontrol industry suffers from lengthy delays in the EU approval process under European pesticide regulation 1107/2009 which is designed for chemical pesticides and not for biologicals like micro-organisms, pheromones or botanicals. Another crucial piece of EU legislation, the Directive on Sustainable Use of pesticides, still turns a blind eye to biocontrol.

“We have a full pipeline of natural solutions waiting to help produce sustainable food for all, while cutting back rapidly on chemical pesticides. The revision of Sustainable Use Directive (SUD) is one of the first opportunities for the EU to translate Farm to Fork goals into policy. The SUD should be much firmer on promoting alternatives to chemical pesticides. The SUD should include an EU wide definition of biocontrol as well as mechanisms to set targets for biocontrol, reward its use and train users”, said Lewis.

IBMA President Herman van Mellaert added: “The revised SUD must take stock of the EU Green Deal and its Farm to Fork Strategy for which biocontrol is a key enabler. As passionate advocates of the Green Deal, the biocontrol industry cannot imagine that the EU Commission would even consider a SUD revision without a proper definition of biocontrol and strong mechanisms to give priority to our nature based solutions. We urge the European Union to unleash the power of biocontrol in support of the Green Deal and Farm to Fork.” 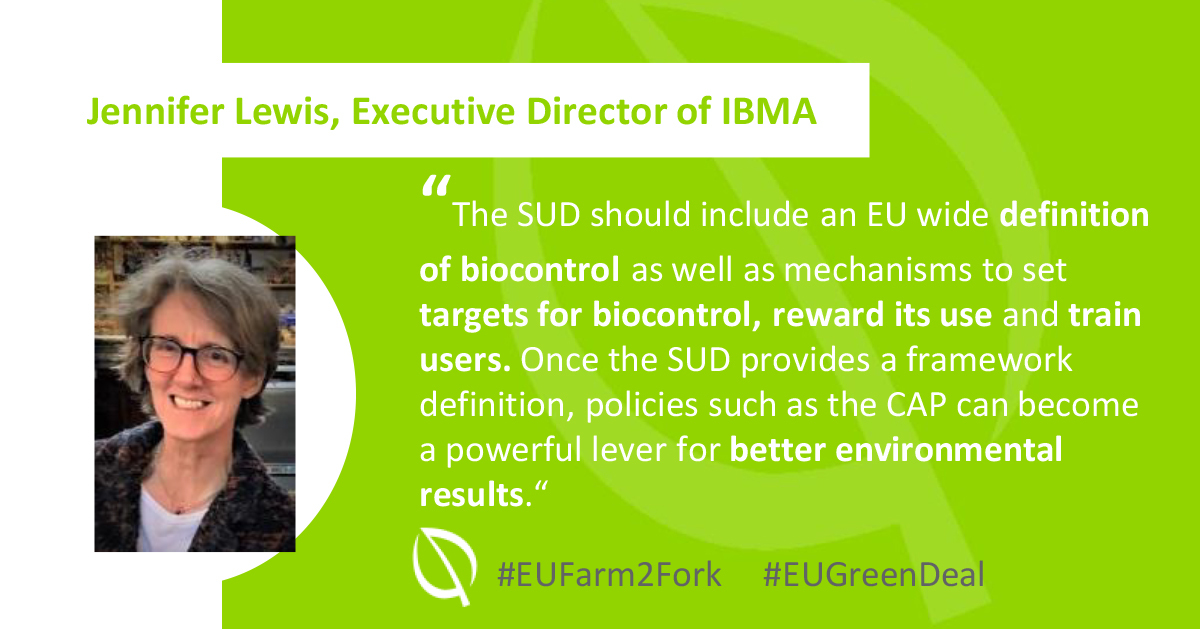