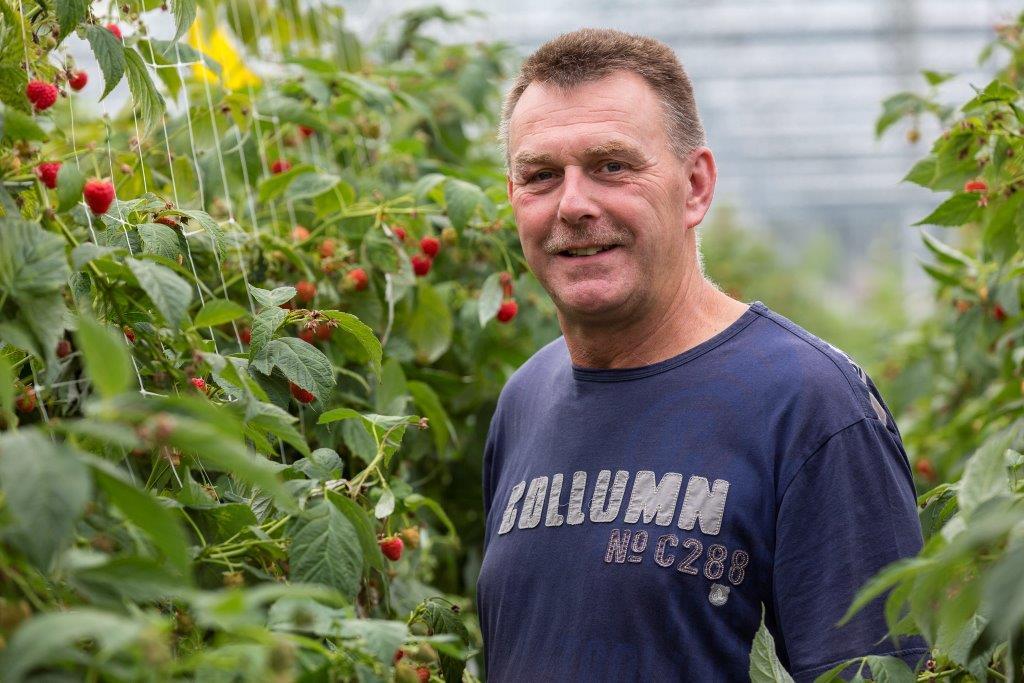 René Simons enjoys looking for innovations. In 2016, he was the first grower to cultivate raspberries in a greenhouse under artificial lighting. More than two years later, he is at the forefront once again but now with the development of a method to tackle aphids in small fruits. The results are promising.

At René’s farms, spider mites and thrips can effectively be controlled with the use of beneficials. Aphids, however, are a different story. In the cultivation of raspberries in greenhouses, the large raspberry aphid (Amphorophota idaei) is a constant cause for concern, and in the cultivation of blackberries in greenhouses, the large blackberry aphid (Amphorophora rubi) is the main source of nuisance.

This was the reason for Koppert to join the distributors Vos Capelle and Klep Etten-Leur and four growers’ locations, including Rene’s, to search for a more effective way of tackling the aphids.

The approach that has been developed is based on the preventative use of the gall midge Aphidoletes aphidimyza (Aphidend). Consultant Guido Roozemond explains: 'We had already noticed good results with this aphid predator in strawberries. We therefore went on to examine whether this predator would also be effective at tackling aphids in other small fruits.’

This turned out to be the case: In the raspberries grown by René Simons under artificial lighting, the gall midge was able to keep aphids at a noticeably lower level. Releasing the predator took little effort: it is only necessary to set out five pots per hectare per week. This was started in week two, early on in the first cultivation period.

Although this method worked, it was not quite enough, René Simons tells us: ‘The hot spots were dealt with, but the aphids continued to spread. The gall midge needed just a little too much time to build up its population in order to keep the entire greenhouse free of aphids.'

It was therefore decided from then on to immediately release parasitic wasps as soon as aphids were detected. The wasps used were Aphidius ervi, also known as Ervipar, which were released one per square metre, three weeks in a row. This did not occur completely without setbacks, however. Although Aphidius is successful in sweet pepper crops, the 24-hour temperatures are lower in the raspberry crops grown by René Simons under artificial lighting, which causes a reaction in the beneficials. Nevertheless, there was some success: three weeks later, an increasing number of Aphidius ervi pupae were detected as well as an improvement in aphid control.

At the start of August, the crop of the second cultivation cycle was cleared on René’s farm. That cultivation cycle started with a single aphid. Jan Snijders, crop protection specialist at Vos Capelle explains: ‘Ervipar was therefore added straightaway, which resulted in very little hindrance from aphids. Preventative use of Aphidend helps you keep aphids at a low level and Ervipar is needed afterwards to clear them up.’

The situation was less complex at the three other participating companies and comparable successes were achieved with less effort. The crops at these companies were standard crops that were started later than on René’s farms. The experiences gained at his farms could immediately be put into practice at the other companies. ‘Much was learned at all four companies and we are clearly on the right path,’ Guido Roozemond concludes.

A leap in the dark

René Simons supplies his products, packaged according to client specifications, via Veiling Zaltbommel to retailers and specialist shops in the Netherlands, Belgium, Germany, Austria, and countries in Scandinavia. The huge expansion of raspberry cultivation in particular in Spain, Portugal, and Morocco, and in greenhouses in the Netherlands prompted him to become the first grower of small fruits under artificial lighting in greenhouses in 2016. It was a leap in the dark as there was hardly any knowledge available on growing small fruit crops under artificial lighting.

It proved to be a good decision. ‘In the spring, I can use artificial lighting to better tailor the climate to the needs of the crop. And in both the spring and autumn cultivation cycles, I can achieve an even better quality and an increase in production. Particularly in spring, Dutch raspberries have a lovely quality to them that can be marketed in the niche segment. I want to seize this opportunity in the market. This will enable me to stay one step ahead of the international competition.’

Integrated cultivation is also important for René Simons in the field of competition. The entrepreneur grows his crops almost entirely organically. ‘The greenhouse used for raspberries is never empty and I can ensure that the biological balance is carried on to a new crop cycle. This is an advantage, although pests can also be transferred from one cultivation cycle to another. But all in all, I rarely have to use any chemical products.’

Nevertheless, he stresses the need for good corrective products. ‘Growing means working with nature which can be unpredictable. Corrective products continue to be necessary to be able to deal with an emergency.’

René Simons initially started out as a vegetable grower and made the switch to small fruit crops in the middle of the 1990s. In Schijndel in the Netherlands, he has a one-hectare greenhouse for growing raspberries under artificial lighting (three crops per year) as well as a small area for outdoor cultivation. In Haaren, he grows raspberries (3.5 hectares), blackberries (1.25 hectares), and redcurrants (4 hectares) in the open field. René even cultivates the young plants for his raspberry crops.