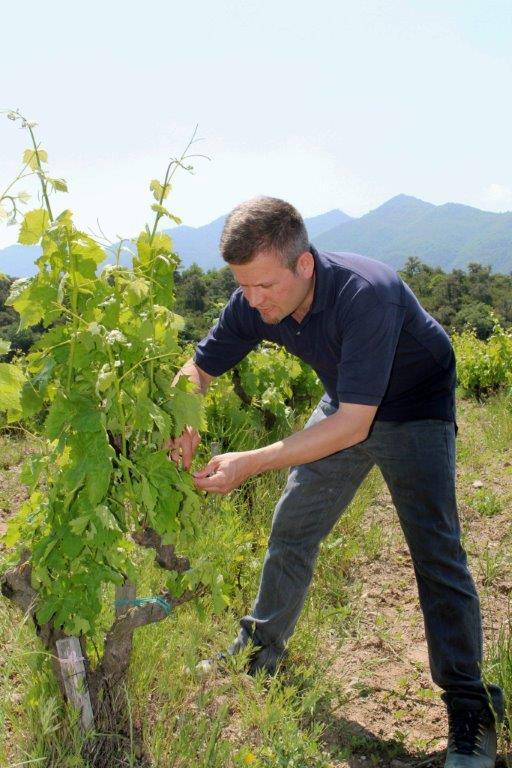 The active nematode in Capirel is Steinernema feltiae, an indigenous entomopathogenic nematodes. Capirel combats the larvae of Lepidoptera, Coleoptera, and Diptera in fruit trees and open-field vegetable crops. In crops such as apples and pears, Capirel for instance enables fruit growers to greatly reduce the pest population in the autumn, a period in which no conventional insecticide can usually be used. This lowers the infestation levels of their crops in the new season.

A great deal of potential
‘Our new product Capirel can be used against many different pests such as most fruit moths, leaf rollers, and clearwing moths in apples, pears, plums, and walnuts,’ explains Cyrille Verdun, the product manager and portfolio-holder for Capirel. ‘Capirel can also play an important role in open-field vegetable crops by combatting the common asparagus beetle. It is understandable that Koppert is searching for more applications for this product. The Research and Development department is hard at work finding new ways to use Capirel in controlling other pests in fruit cultivation, open-field vegetables, and grape cultivation.' ‘The arrival of Capirel on the market has another important advantage for the fruit cultivation sector,’ says Cyrille. ‘As a lot of fruit is eaten fresh and unprocessed, food safety and low or zero-residue levels are essential, yet many fruit growers are struggling with the residue of chemicals in their crops. Capirel is a new weapon in the armoury, complementary to other techniques, to help the fruit growers to reduce their dependence on these chemicals which will undoubtedly strengthen their market position.’

Greater reach and effectiveness
Steinernema feltiae is more versatile than other nematodes. The nematode actively searches for prey but
is just as happy to quietly wait for prey to pass it by. This makes the nematode highly effective, also against pests that do not or hardly move.

Steinernema feltiae is also easy to use. The nematode does not require high soil temperatures or outside
temperatures. Capirel is already effective at temperatures from 10°C upwards (both soil temperature and air temperature) and is optimal between 15°C and 25°C. According to Cyrille Verdun, ‘this is a big and important advantage for the grower. Many competitor nematode products are based on the nematode Steinernema carpocapsae which performs optimally between 20°C and 30°C. This makes the scope of Capirel and therefore also its effectiveness much more extensive than that of other products.’

Up to 80% less damage to fruit
The great effectiveness of the product has been proven by the results from various studies conducted either by Koppert or by independent research organisation. Capirel proved to be able to reduce infestations of the hibernating larvae of the codling moth by 80%, reducing the damage to fruit by 60 to 80%. These can rightfully be called spectacular results.

In crops or areas with heavy infestations, growers can use Capirel as an extra weapon together with other control methods such as insect netting and mating disruption (disturbing the reproduction cycle of pests). Another significant advantage is that nematodes are acroorganisms, which means easy to use. Concretely: a waiting period or a pre-harvest interval is not required after applying Capirel.
Capirel was first released in France with success in 2018, reaching more than 1000 ha of top fruits, mostly organic but also conventional. The company will soon announce when Capirel will be launched on the whole European market.‘

It's just a short wait for growers of fruit trees and open-field vegetables, but Capirel will be here soon
enough,’ says Cyrille Verdun. ‘Their biological crop protection will become even more effective while their
dependence on chemicals will be reduced. In a European context of insecticides withdrawal - neonicotinoids - and stronger regulations, this is good news.’

Nematodes show incredible potential, Koppert invests more in R&D
The nematode products of Koppert have a good market reputation for their effective performance. Entonem, Capsanem, and Larvanem and Sportnem have become an inherent part of the crop protection of many growers and in many different crops. Koppert's vision is to use nematodes against many more pests and their research has shown great potential in this regard. The R&D department has intensified its efforts in this field and is busy with many different studies and tests. The company expects to be able to combat a much greater range of pests with nematodes in 2019. We will let you know more about this next year.