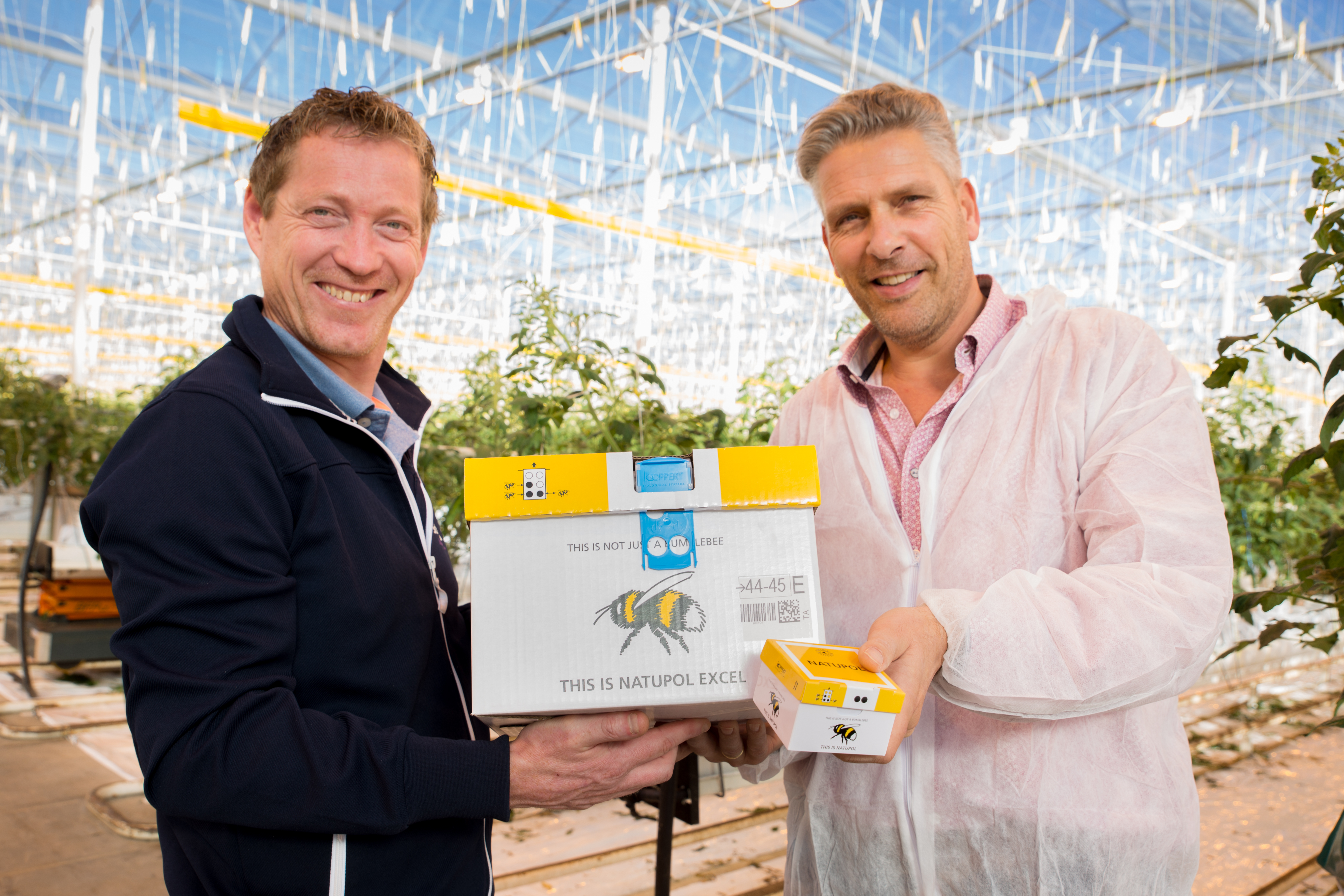 Intensive research into the sight of bumblebees has shown that their vision is different to that of humans. This simple discovery has led to a number of pollination innovations by Koppert Biological Systems. The ‘bee vision’ and additional innovations have shown a positive impact on greenhouse pollination; especially in crops grown under artificial light.

What is ‘bee vision’?

Research has shown that bumblebees have orientation problems when daylight is reduced by factors such as the use of artificial light during the darkest months of the year or extra layers of poly covers. The ‘bee vision’ features on the new range of Koppert hives have been designed to help bumblebees navigate in these and other unfavourable conditions. The new Natupol Excel hive, for example, contains extra cues that are visible to bumblebees alone and enable them to find their hives more easily in the crop.

‘Introducing colours and changes in the print in special coatings on the Natupol nest boxes, now helps bumblebees to find their way back to their hives faster,’ explains Koppert’s Pollination Product Manager, Remco Huvermann. ‘The innovation means that bumblebees use less energy for finding the hive in the crop and have more energy to spend on effective pollination. The cues obviously play an even more important role when light conditions are not optimal.’

The biological content of the nest boxes has been improved; sugar water content has been increased for extra energy, and ventilation openings modified and secured against ‘intruders’.

‘We have taken some big, innovative steps since Koppert moved into the field of commercial pollinators in 1989. The new Natupol system is the result of 26 years of accumulated expertise coupled to the latest technology – our best bumblebees, technically advanced hives, combined with our customized advice, deliver consistent performance and the best availability in the market,’ Huvermann adds.

The ‘bee vision’ and additional features are now present on all the Natupol hives, including Natupol Smart (small), Natupol (standard), and the large Natupol Excel hive.

Natupol remains Koppert’s flagship pollination product. The standard hive is the perfect product for general applications and crops with between 25-35 blossoming flowers per m² per week - such as round and plum tomatoes; and growing surfaces greater than 2000 m². The visibility has been optimized on the boxes so fewer bumblebees get lost in the greenhouse. This results in better pollination.

Natupol Smart is mainly used in crops grown on an area smaller than 1000 m² or in crops with less than 25 blossoming flowers per m² per week, such as beef tomatoes or seed crops, for example.

The Smart bumblebee hive has a wide range of applications and an increased longevity due to new innovations such as optimized visibility in the crop, improved biological content, a 50% increase in sugar water and 100% larger brood space.

Natupol Excel is specifically developed for crops with a high number of blossoming flowers per m² per week (above 35), such as cherry or snack tomatoes and (straw)berries. Natupol Excel can also be applied in illuminated greenhouses. It has a bigger colony, large ventilation holes equipped with a smart intruders block, 19% more sugar water for increased and longer pollination, optimized visibility through the strategically placed reflective cues on the boxes and additional colour cues around the hive entry that conforms to the bumblebees own visual spectrum resulting in improved pollination results.