Kevin Vandevelde is the head of cultivation and manager of Les Serres des Hauts de France in Arques, Pas-de-Calais.

After having worked on the family business in Belgium, he crossed the border to construct nine ha of tomato greenhouses, divided into two sections.

Today, he tells us about his experience managing the Pepino mosaic virus. In recent years, he has used two different protection methods, including the V10 vaccine marketed by Koppert.

Have you had to tackle the Pepino mosaic virus before?

Kevin Vandevelde: I’ve known about it since it arrived in Europe. That was in 1998. We'd been protecting my father’s greenhouses in Belgium for ten years, using a competitor’s vaccine. When I moved to France three years ago, I continued using this vaccine. The first season went well. Although I observed that some of the plants turned yellow due to the virus, this did not result in any major losses.

The difficulties arose after my second season in France, which was last year. Although we applied the competitor’s vaccine, the first symptoms appeared on the plants in less than ten weeks. They worsened in the middle of the season, at the end of April/start of May, with symptoms on the fruits rendering bunches unsuitable for sale. We were forced to dispose of a large quantity. Following this bad season, a new adviser told us about the V10 vaccine, which we decided to test.

When did you apply V10 to your plants?

Kevin Vandevelde: We applied V10 two days after the plants were set up in the greenhouses. We were pleasantly surprised by the swiftness of our V10 order: we ordered the vaccine just a week in advance, and it was there in time for planting. This responsiveness is an advantage over the competitor vaccine, for which there were long ordering delays because we were obliged to test the plants before inoculation with the vaccine. This prior test is not required in the case of V10. 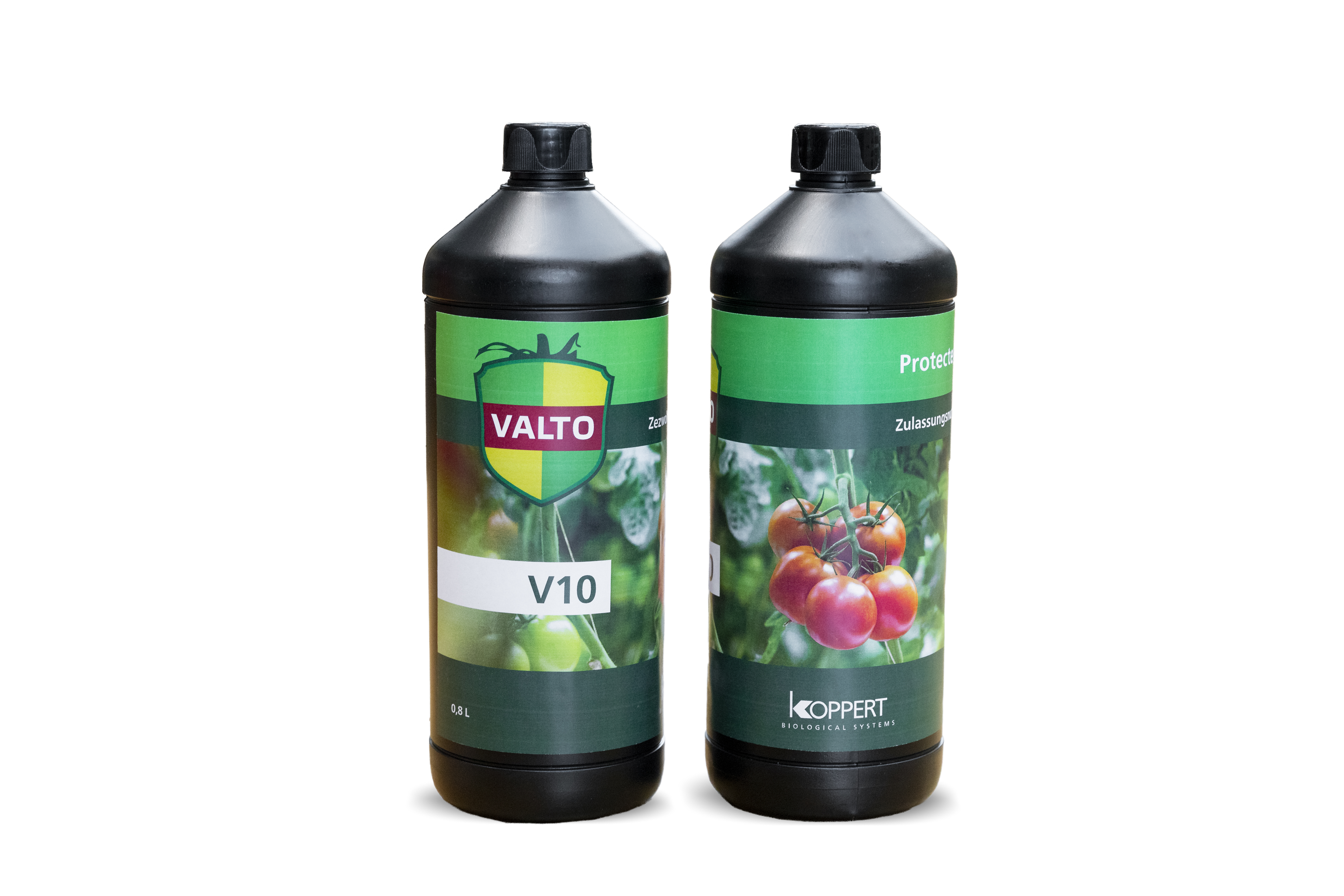 Which application method did you use for V10?

Kevin Vandevelde: We chose* to apply the vaccine by rubbing one leaf per plant, using a sponge soaked in V10. This is quite a time consuming technique, but we consider it efficient. You can easily see the traces of application on the leaf, even three weeks later. This makes it easy to verify that all plants have been properly vaccinated. Furthermore, it guarantees even distribution of the product. We weren’t as certain with the competitor product, which was applied with a spray, and we think that the problems we had two years ago arose from the fact that some parts of the greenhouse weren’t as well vaccinated as others.

A box with everything necessary for application is supplied with V10: large and small buckets, sponges, cotton and latex gloves, strings for carrying the buckets... this is an asset, because it makes things easier to organize. We prepared five litres of V10 solution that we then divided into six small buckets, so that each applicator had their own bucket. We prepared small quantities of the solution, to cover half a day’s needs, in order to prevent the product from getting too warm or losing its quality.

Each applicator wore latex gloves to protect their hands, plus cotton gloves to facilitate handling. The sponges had to be regularly dampened with the solution to ensure the presence of the vaccine. It is also recommended that they are regularly replaced, to prevent any propagation in the event that the virus is already present in the greenhouse. We changed the sponges around every three hours.

It took us one and a half days to do half the first greenhouse, because it was the first time, but we were more efficient in the second greenhouse.

*It is also possible to apply the vaccine by gently crushing the leaf using the thumb and index finger, while wearing a cotton glove soaked in V10.

How did sampling to confirm the presence of the vaccine on the plants go?

Kevin Vandevelde: Sampling took place four weeks after application. As I was not available, our Koppert technician came to collect the leaves, following a very precise protocol. He separated the samples into the plastic sachets provided, and sent them in a prepaid envelope, also supplied by Koppert. The samples were tested in a laboratory in the Netherlands. The results showed that the percentage of vaccinated plants was better in the first greenhouse than the second, but vaccine cover was sufficient in both cases. As the results from the second greenhouse weren’t as good, I decided to take another sample seven weeks after application, which showed better vaccine cover.

On average, 85% of plants in the greenhouse were protected. I didn’t have any concerns about the Pepino mosaic virus this year.

I preferred this sampling technique over that of the competitor vaccine, which takes place ten weeks after the vaccine is applied. It’s a bit too late, because two years ago when we had the bad season, we had seen symptoms of Pepino mosaic virus appear before sampling had even taken place.

Do you plan to reuse V10 for coming seasons?

Kevin Vandevelde: So far I’m convinced. So yes, I will reapply V10 next year!

V10 is steadily receiving registrations around the world. The following countries have a registration for V10 :